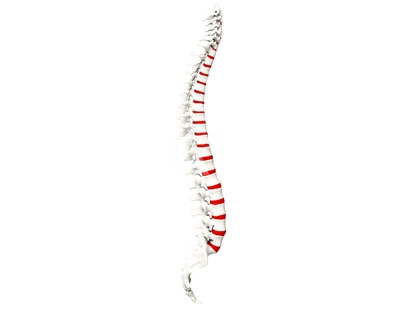 The vertebral column: how it is formed and how backache can be cured with natural disciplines

The vertebral column (or backbone, or spine) is the complex system of bones that supports the bodies of what are known as vertebrates, i.e. living beings with a skeleton structure of bones and or cartilage.

The spine does not only support the organism, but it makes it move and protects the spinal cord, in which the whole of the main nervous system passes. Without this protection, the cord would be seriously exposed to shocks and traumas.

In a baby, the vertebral column represents about 40% of its height and it continues to increase in size until about 18, nevertheless keeping the same proportions both with respect to the body and the elements that form it.

Let’s have a look at its anatomy in greater detail and what to do in the case of backache.

Anatomy of the vertebral column

The  human spine is made up of 33 or 34 vertebrae  (depending on whether all the  coccygeal vertebrae  are fused together or not or whether one is separate), divided into 5 areas which are:

In the vertebrae there is a hole called the vertebral foramen, through which  the spinal cord passes, the main route of communication between the brain and the peripheral nervous system.

It is important to remember that the nerves that take vital energy to all the organs in the human body radiate from the spinal cord.

These discs are fundamental for the health of the spine, as they amortize the pressure to which it is subjected and give it mobility. It is therefore important that they are healthy even though they may face various pathologies that can reduce their mobility and cause pain.
The commonest pathologies of the intervertebral discs are those which are commonly called discopathies. One of the commonest is hernia of the disc.

The commonest causes of discopathies are:

There are also cases of accidents involving the spine.

Curvature of the vertebral column

In the absence of pathology, looking at the vertebral column from the front it is straight, but if it is looked at from the side then possible curves can be observed which are called:

The origin of backache may be:

As well as evident physical causes, backache can also be associated with causes of a psychosomatic type. This has also been established by the S.I.R.E.R. (International Society of Research and Studies on the Spine).

Prof. Nachemson Alf L., director of the department of orthopaedics at the University of Goteborg in Sweden, one of the greatest experts in this field, maintains that in the majority of cases backache is the local expression of anxiety, stress, depression and many other disorders of a psychological nature. This is also confirmed by a figure that says that in 80% of cases of backache, it is not due to causes that can be demonstrated.

Hernia of the disc

The hernia of the disc is also known as “discal hernia or prolapse”. This pathology is a breakage  of a vertebral disc which opens, allowing the discal material to leak out which then compresses the surrounding nerves in the vertebral column.

A hernia of the disc can:

The commonest causes of the breakage of one or more vertebral discs is the loss of elasticity and flexibility due to the passing of the years and the physiological ageing of the individual.

In other cases it may appear due to efforts due to work, such as for people who manually lift weights every day for years and years, or also due to traumas such as car accidents.

There is also the cervical discal hernia which entail pain in the neck and shoulders, a pain irradiated to the arm, numbness and pins and needles in the arm and hand.

In general, pain in the arms or neck is the first sign of irritation of the nerve roots due to problems in the cervical area.

The pain can be widespread, intense and difficult to localize, or acute, burning and easy to locate.

Symptoms of hernia of the disc

The hernia of the disc is not always necessarily painful. The symptoms vary depending on age and the point where the hernia has formed.

The main disorder which is felt in the case of discal hernia in the vertebral column is an acute and sharp pain. The pain in some cases can irradiate down to the leg to which the nerve involved is assigned, in this case the pain is worse.

The onset of pain due to a discal hernia can appear suddenly or be preceded by a feeling of breakage or a twitch at the level of the vertebral column.

Other common symptoms of the discal hernia are:

Preventing hernia of the disc

Prevention of the hernia of the disc can be assured through a healthy lifestyle which includes a healthy and balanced diet, keeping a normal weight, doing regular but moderate physical activity.

A correct posture in the normal daily activities is also indispensable to prevent alterations of the vertebral column which can lead to a hernia.

The importance of a healthy vertebral column

It is therefore very important to look after your vertebral column with prevention and if disorders appear they must not be neglected. Having a healthy vertebral column has a positive influence on the quality of a person’s life because a nervous system that functions correctly allow the free flow of vital energy and thus allows remaining in a condition of psycho-physical well-being.

It is also possible to prevent and/or slow down degenerative pathologies such as arthrosis, but also reduce the risks of developing issues linked to vertebral discs such as hernias of the disc.

Lastly, in the case of symptoms already present these can be reduced and the issues linked to vertebral movements or postural distortions can be improved.

The Naturopath cannot make diagnoses therefore the patient comes with a diagnosis of backache already  made by a doctor and he goes to a naturopath looking for support to relieve the symptoms with natural remedies.

Having established with the person that some remedies cannot be taken in combination with medicines, the naturopath may advise taking one or more of the following natural remedies:

In addition to these remedies, Naturopaths also recommend a detox treatment for the organism that can eliminate waste and reactivate and improve the circulation. Lastly they can also advise on the most suitable foods for this function, including according to the personal lifestyle of the  individual or according to possible food intolerances.

Osteopathy was founded by an American doctor, Andrew Taylor Still (1828-1917), and it can be considered an evolution of manual medicine. The term comes from the Greek osteon-bone and pathos -suffering.

This technique is one of the holistic disciplines because it is inspired by the concept of unity of the structure of the organism and its functions.

One of the classic indications of osteopathy concerns the muscular-skeletal system with the various pathologies of the vertebral column and those of the joints and the dysmorphisms or in the case of traumatic outcomes such as fractures.

The diagnosis and the treatment  of the osteopath

In his approach, the osteopath analyses the patient with the possible alterations and makes a complete evaluation, also including the other systems of the organism in addition to the muscular-skeletal one. The osteopath also evaluates the person’s posture.

It should be remembered that the diagnosis of backache always starts from an evaluation which is usually traditional, requiring a CAT or magnetic resonance to define whether there are or not pathologies of the vertebrae or of the intervertebral discs and a possible discal hernia.

The osteopath treats the patient through manual techniques which act directly on the dysfunctions of the vertebral column which are at the origin of the discopathies, seeking to restore functional harmony.

The manipulations are very gentle and aim at helping to lengthen the contracted muscles, like a sort of stretching guided by the osteopath.

There are no contraindications to osteopathy if carried out by a professional osteopath, in some cases in an acute phase of pane, the pain can be reduced and the use of analgesics and/or anti-inflammatory drugs can be reduced.

Osteopathic sessions usually last from a minimum of 20 minutes to a maximum of 40 minutes, with a frequency of weekly or fortnightly meetings, depending on the severity of the disorder.

In the case of backache, it is also possible to turn to homeopathy which normally acts both on the physical side and on the mental one

Diagnosis and treatment by the homeopath

The homeopath evaluates the symptoms reported by the patient as  whole and put into relation with the personality of the patient and other factors such as, for example, the season, the external temperature etc.

Having made the diagnosis, he can recommend one or more of the following homeopathic remedies and may also refer the patient for physical treatment of the vertebral column such as treatment by an osteopath.

The commonest homeopathic remedies prescribed by homeopathy include:

The dosage of the remedy and period of administration are evaluated by the homeopath competent on the subject.

back to top
FaLang translation system by Faboba